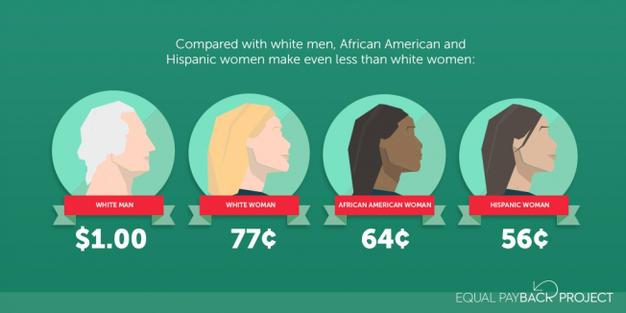 Equal Pay Day is typically recognized in April as symbolizing how far into the following year women must work to catch up to what men make in a year. Though this day serves as an important reminder of the persistent gendered wage gap, the date ignores the even harsher pay disparity Black women face. While women overall earn 79 cents per male dollar, Black women make

pared to the overall workforce, Black women make up a disproportionate share of “the fastest-growing low-wage jobs” which often pay wages at or close to the minimum wage. At the same time, Black women are systematically excluded from positions of power inside the corporate world. There are currently zero Black women serving as CEOs of Fortune 500 companies; for reference, there are 25 male CEOs on that list named John. At Google, Black women make up just 1.2 percentof the workforce. As Facebook’s COO summarized in a recent op-ed in the Wall Street Journal:

“Women on average are still underrepresented at every step of the corporate ladder. The gap begins with entry-level jobs and widens the higher you climb. This isn’t because of attrition; women and men stay with their companies at roughly the same rate. And it’s not for lack of asking; women seek promotions at the same rate as men, but are promoted less often. The situation is worse for women of color, who face more obstacles and receive less support. All told, only 1 in 5 C-suite executives is a woman—and not even 1 in 30 is a woman of color.”

To explain these disparities, experts point to “occupational segregation,” a theory stating that beliefs about which jobs are “masculine” or “feminine” inform an individual’s career choices and outcomes. Jobs with a greater percentage of men are compensated better, regardless of education level, and race only intensifies these trends. Further, the lack of Black women in managerial or executive roles then discourages younger Black women from striving for better-paid positions, according to a report from Stanford’s Center on Poverty and Inequality; this lack of representation means younger Black women do not have access to professional mentors who share similar experiences.

To remedy this problem, policy experts have proposed raising the federal minimum wage, thus boosting the earnings of women in low-wage jobs. Others solutions focus on changing corporate culture to identify unconscious bias and improve the mentorship opportunities for women of color, eventually chipping away at the pervasiveness of occupational segregation.

The Women’s Fund of Rhode Island (WFRI) recognizes the value in these approaches – and others - as systemic work aimed to uplift women and close the gender wage gap, particularly for Black women and women of color. In recognition of Black Women’s Equal Pay Day, we encourage you to get involved in your community however feels comfortable to you:

WFRI’s mission is to invest in women and girls to advance gender equity through systemic change, will be exploring the Intersectionality of Feminism at our September 20 Cocktails & Conversations event. It’s important to recognize that women of color, as well as those from different economic classes, religious backgrounds and sexual identities, experience gender bias more acutely. The program, sponsored by IGT, will identify some of those deeper challenges and how we can come together as a progressive force for social change. For more information and to register, visit https://www.brownpapertickets.com/event/3397822.

Later this year, WFRI will be releasing our Status of Working Women of Color in RI report, so be sure to register to receive our news on our website. And if you are interested in learning more about the work of the Women’s Fund of Rhode Island, viewing our research and or volunteering, find out how you can support us here.