Fighting for a Cause at a Cost

Fighting for a Cause at a Cost 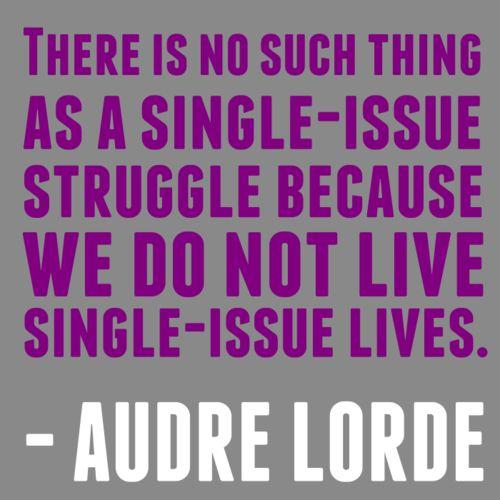 I’m driving behind an SUV when I notice three stickers plastered to its bumper. The first reads “NRA: STAND AND FIGHT;” the second is the Gadsden flag screaming “DON’T TREAD ON ME.” And the third? The Human Rights Campaign equal sign. I laugh because of how absurdly incongruous they seem together. Then I think, well, maybe he’s the well-meaning, gun-loving, Fox News-watching kind who probably believes marriage is between a man and a woman except when it comes to his gay nephew.

Seemingly contradictory belief sets are not uncommon. Most people fail to see the interweaving connections between social issues; for example, how the NRA funds conservative politicians who support antigay legislation. And while I’m talking about Log Cabin Republicans and “let them do what they want” libertarians, I’m also talking about supposed “progressives.” Look at Patricia Arquette’s recent white feminist faux-pas – an all-too-common, off-the –cuff comment that embodies so much of what’s wrong with women’s rights activism. Or take any straight dude who considers himself a feminist because he posted on Instagram about women’s equal pay, but spits out “no homo” without realizing the weight of his words.

Such single-issue advocacy plagues the queer community. From gay misogynists, to cissexist lesbians, to white, middle-to-upper-class, able-bodied-and-minded exclusivity, we’ve done a bang-up job making sure our movement reflects the values of those with the biggest megaphones. It’s why, after a second of reflection, I realized the guy driving the SUV could have just as easily been gay himself.

All our struggles are intertwined and we’re only as liberated as those on the bottom-most rung of the social ladder. I don’t care how infrequently you shower; you won’t cure capitalist violence with your freegan lifestyle without recognizing that your ability to wear dreadlocks as a white person and not be profiled is a manifestation of privilege. Advocacy does not equal shouting about your issue until it dominates the conversation, not does it mean trampling over those whose movements made yours possible.

I encourage everyone, whether or not you consider yourself part of a movement or community, to notice your bumper stickers. Maybe you were born with them, or they gathered over time, or you stuck them there per the misguidance of a Rush Limbaugh-quoting uncle. Consider which ones conflict, and start peeling. They might come off slowly. They may never come off at all. And they’ll probably leave some residue. But simply recognizing the potential contradictions in your advocacy or belief system is powerful enough to catalyze a personal revolution, and someday, a collective one.