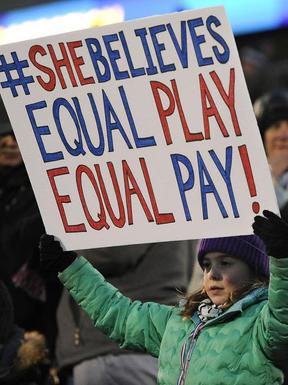 A millennial woman’s view of the widening gender pay gap

In 1869, a woman working as a government employee in Washington, D.C. wrote a letter to the editor of the New York Times. By lodging a complaint that her male colleagues were paid double her $900 salary for the same work, she set off a discussion that continues even now.

In the nearly 150 years since her letter, protests, legislation, pledges, non-profit work, advocacy, and much more have been attempted to address the gender wage gap. But despite years of work women in the United States make on average 20-25% less than men, a disparity that gets even worse for women of color.

women, as well as children. That’s why important for the well-being of all of Rhode Island that this gap is addressed, whether through legislation, commitments from local businesses, or other tactics that tackle the systems that have allowed the wage gap to exist as long as it has.

The fight for equal pay has seen substantial progress, with (incredibly) slow but steady changes made in closing the pay gap. That said, the fight is not over. Last month, I read that the gap between men and women’s wages has actually gotten bigger for my generation, the millennial generation, in the past five years.

It’s widely agreed in American culture that women should receive equal pay for equal work, and for that reason, I think the discussion around this problem has gotten that much quieter. The work of the Women’s Fund of Rhode Island is crucial in keeping the dialogue alive, and its advocacy is critical in keeping pay equity on the front burner.

Help the Women’s Fund of Rhode Island raise the heat on gender pay inequity by attending Cocktails & Conversations: Gender Equity in the Workplace on March 28. Click here for more information and to register for the event. I encourage you to contact your legislators to let them know you support efforts to increase the minimum wage and the Fair Pay Act of 2018. For more information, visit www.wfri.org.