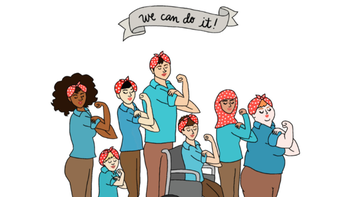 There is a long history of female political activism in the United States, from earning the right to vote to running for political office. The anniversary of the Nineteenth Amendment offers the opportunity to acknowledge that history and at the same time, to fight for an equitable and inclusive women’s political movement.

Women have voted at higher percentage than men have in every presidential election since 1980, according to a Rutgers University study. And this trend exists even though women have had the right to vote for less than a century -- states ratified the Nineteenth Amendment guaranteeing female suffrage this month in 1920.

The passage of the Nineteenth Amendment is owed to decades of female activism.

The movement really gained momentum in the mid nineteenth century; amid cries for abolition, women asserted that they too deserved expanded political rights. Leaders such as Elizabeth Cady Stanton and Lucretia Mott outlined their calls to improve the status of the American woman at large events like the Seneca Falls Convention in 1848. On a smaller scale, women organized themselves in local groups to advocate for change at the community level.

The Suffrage Movement employed several arguments to fight for equal political status. Importantly, advocates based much of their reasoning in traditional notions of gender roles; essentially, women’s morality could help reform the slimy world of party politics, suffragettes maintained. In a 1896 pamphlet for the National American Woman Suffrage Association, Alice Stone Blackwell explained that woman’s unique maternal role could “increase the moral and law-abiding vote” and force political parties to nominate “men of respectable character” for office or “lose the women’s vote.”

Reflecting on the Suffrage movement, contemporary activists recognize the importance of these early leaders, but critique their elitism and racism. As Brent Staples writes in the New York Times last month:

"Historians are rightly warning groups involved in suffrage commemorations not to overstate the significance of the 19th Amendment. It covered the needs of middle-class white women quite nicely. But it meant very little to black women in the South, where most lived at the time and where election officials were well practiced in the art of obstructing black access to the ballot box."

With this history in mind, women must use their vote to continue advocating for women of all backgrounds. The 2018 midterm elections provide a unique opportunity to locate that political voice. More women than ever have entered congressional races; 472 women entered House races, compared to 298 in 2012, and those candidates have been pushing issues relevant to working women to the forefront, from childcare to reproductive health measures. As Michelle Bachelet, the head of United Nations Women and former President of Chile said: “For me, a better democracy is a democracy where women do not only have the right to vote and to elect but to be elected.”

Thank you to Alex Skidmore for writing this piece. She points out that oppressive systems plagued our nation at the birth of the suffrage movement, much of which still exist today in the form of racism, white supremacy, transphobia and misogyny. Join the Women’s Fund of Rhode Island on September 20, 2018, for our next Cocktails & Conversations: Intersectional Feminism, where we will explore these issues and discuss the necessity of including non-white and non-binary voices in conversations about feminist issues. Tickets can be purchased at: https://www.brownpapertickets.com/event/3397822