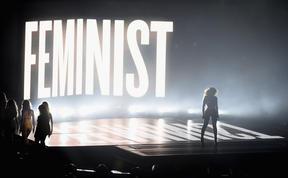 The word “feminism” has worn the hat of many titles and tones, from heavy to light, from positive to negative, clichéd and slightly misunderstood. Before people even truly understood what the word meant, which today rightfully stands for equitable human rights for all people; the lack of knowledge within American pop culture has influenced people’s real life perceptions of feminism. Arguably, this has defined what “the American dream” has been over the years, first being seen on the television screen in the 1920s.

Many people may not be aware that during the 1920’s, most films were written, directed and filmed by women. Women filmmakers during this era had the ability to captivate audiences in a way that wouldn’t be possible in today’s society with an infinite plethora of screen time options and would otherwise seem like a snooze fest to filmgoers of today. Successful female filmmakers of that time included directors like Dorothy Arzner, Lois Weber, Alice Guy-Blanche and Clara Bow. Unfortunately, all of this drastically changed at the start of The Great Depression when Wall Street bought out Hollywood. From this point on, a male-dominanted work force decided what would appeal to filmgoers, and this patriarchy within film history is still prevalent today.

“I talked to so many men. I walked into room after room of men who got to sit around and discuss whether they thought this movie was something that would appeal to women.” –Jill Soloway, in Entertainment Weekly, 2014.

The book, We Were Feminists Once, by Andi Zeistler, identifies shocking statistics of what happened right after Wall Street bought out Hollywood. There was a moral conduct code that applied for all films at the time of what was allowed to be presented called, “The Hays Code” created by former Postmaster General William Hays. The code dismissed most of women’s opinions and expertise, solely depicting the “white picket fence,” where women stayed behind in the household caring for the family, while men went out and worked and controlled the finances. It was a condensed, G-rated version of how American culture should be, especially in regards to how women should conduct themselves. The Hays Code disallowed women to be portrayed on screen in risky roles, such as, independent, powerful, sexual, homosexual, transgender, or as money makers. Zeistler states,”…Hollywood’s neat, uncomplicated homogenous reality. That these were all committed to celluloid for more than thirty years before the Code was lifted had a profound effect not just on Hollywood’s imagination, but on that of America at Large.”

After this code was lifted, there have been many more feminist films, in both the cinema and on tv. Think of “Samantha Jones” in Sex and the City, 90’s films like Clueless, Aliens, and Beyonce’s feminist platform and many other creative outlets that respect and reflect women as capable, equal and powerful independent beings within society. There are thousands that exist today, but society still has a long way to go. Zeistler also mentions how,”…the elements of what makes a film feminist can be varied as the characteristics of the people who watch them.”

Next time you turn to watch your favorite movie, tv show, or music artist, keep in mind the way women are portrayed, who created the piece, the demographics it contains and the audience it appeals to, and check to see if it aligns with your values. The evolution of Feminism in Pop Culture is an ongoing process, but the things that you consume become embedded into your thoughts and can influence your behaviors about how society should be.

Also keep in mind who you want to support by financially investing within your media time.