The Surprising Truth About the Wage Gap

The Surprising Truth About the Wage Gap 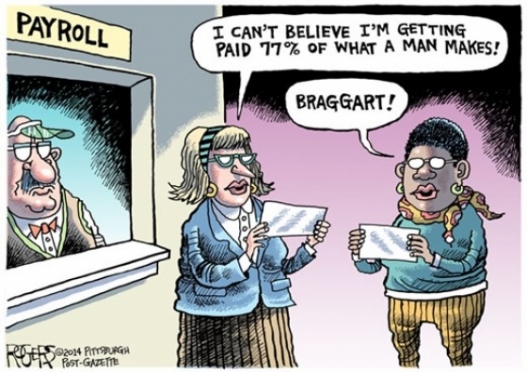 The gendered wage gap has, in recent years, become something of a feminist buzzword. People are talking about it every time they talk about equality; you’ll find the phrase on the first page of every Women’s Studies 101 syllabus, in every internet think piece about “Why I Need Feminism”, and on the lips of every celebrity making safe forays into public activism. I likely do not need to repeat here the

statistic that women make $0.78 for every one dollar made by a man. At this point, everybody knows it. We talk about the wage gap as a simple injustice with a simple solution to match: equal pay for equal work. While it may be attractive to think about it this way, the idea that we can fix the wage gap by giving every woman a 22% raise is a dramatic oversimplification of a problem which actually extends

outwards into many different spheres.

The $0.78 statistic is, truthfully, incomplete. Only white women earn that much to the white male dollar. Black men earn even less in comparison to the white male dollar than white women do ($0.75), black women less than them ($0.64), and Hispanic women even less ($0.54). The issue is intersectional, as most are, and its intersectionality complicates it significantly. Does the fact that white women earn more than black men mean we should be talking about the “race wage gap” instead? And why is there any gap in the first place? How do we work with the fact that women need to take time away from work when they want to have children is a factor in their lower lifetime earnings? Or that their employers feel less compelled

to offer them higher salaries because they do not see female employees as breadwinners? The bulk of the problem we are talking about with the wage gap is not those instances of two people in the same profession earning different wages because of gender, but because of larger systems which influence the ways in which women do (and don’t) earn money.

Critics say that the wage gap exists not because of wage disparities for the same job but because women just don’t enter fields that pay very highly. The truth is that they are right, at least in part. While women consistently earn less for the same jobs than their male colleagues, and are less likely to be promoted or given raises, women are also underrepresented in lucrative fields in general. Women earned only 18.4% of bachelor’s degrees in any field of engineering (where the median salary is $100,000) in 2011, but 79% of bachelor’s degrees in education, where the average salary hovers around $50,000. There’s your wage gap. Now, just because the wage gap is at least in part a product of women choosing less lucrative fields, doesn’t mean it’s case closed for feminists and we can all move on to something else. This is still a feminist issue.

Why aren’t girls becoming engineers? What is it that leaves us with classes full of girls who think they can’t do math and boys who think they can’t write or communicate effectively? What are we teaching our children about their biological predeterminations? One of the most effective measures we can take towards closing the wage gap is to raise daughters who are confident in themselves as quantitative thinkers and sons who are not afraid to explore “feminine” interests like caregiving and literature. Seek out role models for them who cross these arbitrary gender lines to find success and happiness in careers of many different types. And teach girls the importance of negotiating for their full worth rather than accepting minimum salary offers that male candidates would likely negotiate upwards. While 22 cents might not seem like a lot (or 36 cents, or 46 cents), it represents a major societal failing to level the playing field for women and other marginalized groups in the workforce and make total equality a reality.