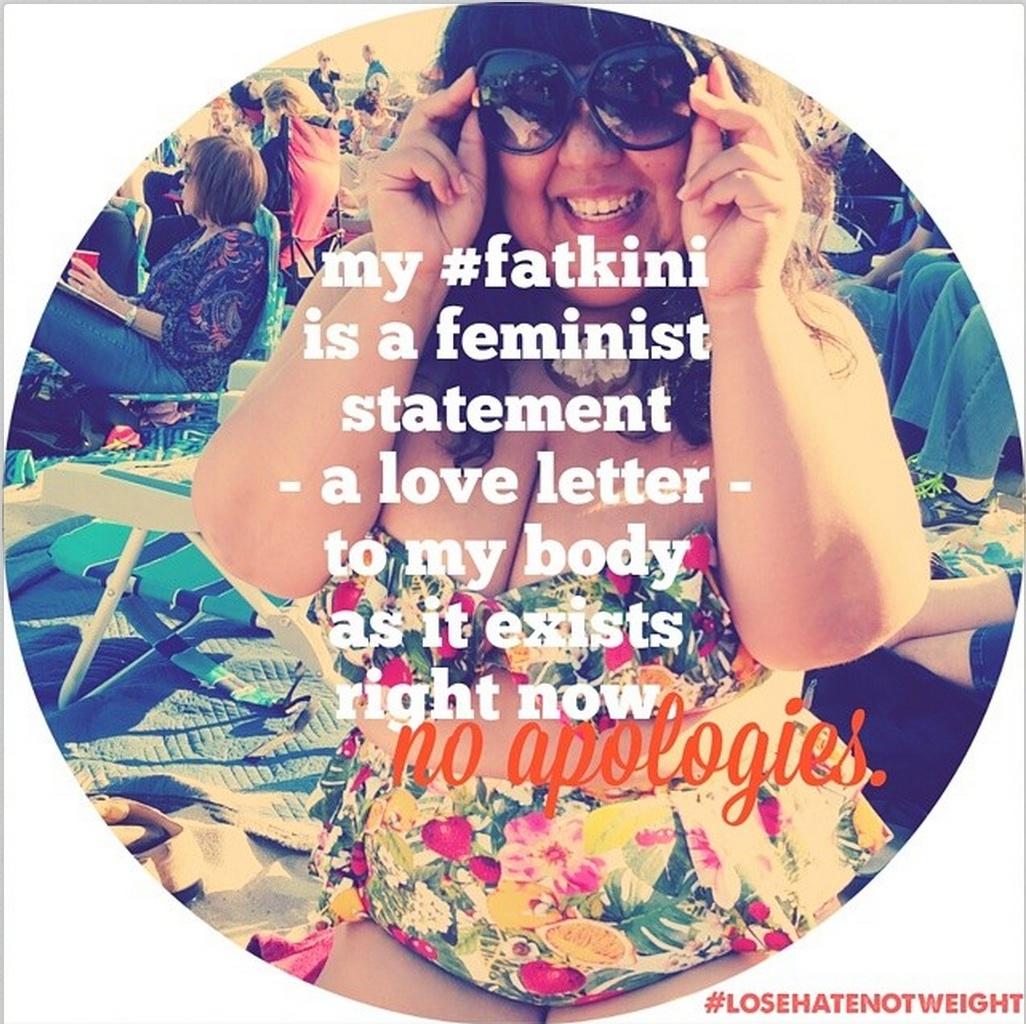 It’s swimsuit season! Are you feeling bad about yourself yet? If you’re like most humans I know, you’re too bony, too curvy, too flat, too pale, too dark — basically, your kind should just stay away from the beach or pool. Or at least cover up that unattractive flesh.

During and leading up to the summer months, we’re bombarded with headlines promoting “beach-ready bodies” (which, in my dictionary, means only “sunscreened”), as well as friends’ flattering selfies from the sand(hashtag you’re sucking your stomach in).

Which is why you should pay attention to the activism happening on social media (and, of course, in real life). Check out #fatkini and #losehatenotweight on Instagram. These hashtags sometimes accompany pictures of women working bikinis on the beach or looking fierce in summer dresses and sandals. And most, if not all, of the women are fat. Their radical self-love has earned attention from mainstream media outlets like the Huffington Post, not to mention a reactionary wave of critics yelling at them for existing in public.

Photo credit: Virgie Tovar - the woman behind the #LoseHateNotWeight hashtag.

Why? I wondered, as I scrolled through fitspo photos labeled with fat-hating hashtags (I won’t link here because they don’t deserve the clicks) and read ignorant take-downs of these fat feminists’ badass body ownership. Why should a thin person be upset by a distant fat person’s bikini-clad body on social media? Then I remembered: that hatred has been cultivated in most of us since birth. We, especially women, are taught to feel disgust with, and attempt to “fix,” our bodies unless they fit certain dimensions and shades.Seeing other people flagrantly violate that norm unseats everything we’ve been working for our entire lives.

Language is powerful,and these ladies’ reframing “fat” as a neutral or positive descriptor in a culture that says fat should be shameful (“You’re not fat, you’re beautiful”) is one step toward changing perceptions. They’re proving that beauty doesn’t know physical boundaries. They’re embracing the space they take up, a truly feminist notion. And maybe most importantly, they’re advocating compassion, for our own humanity and for one another. Because if we focused on losing hate as much as we obsessed over losing weight, we might all feel a little better about ourselves.

Contents of this blog constitute the opinion of the author, and the author alone; they do not represent the views and opinions of Women's Fund of Rhode Island.