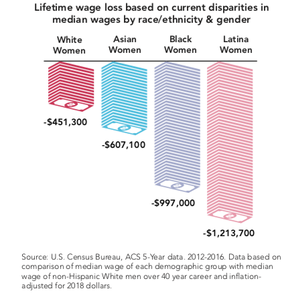 April 2 is “Equal Pay Day” and represents how far into the year U.S. women must work to earn what men earned in the previous year. It’s important to note that the date differs when we segment by ethnicity. Black women’s equal pay day is August 22 and for Latina women, it is Nov. 20.

Studies done by the Association of American University Women and the National Bureau of Economic Research, while recognizing that some of the wage gap is due to occupational segregation and family care choices, also suggests that up to 38% of the gap is unexplained and likely outright pay discrimination. Pay disparities appear as soon as women and men begin their careers, with women making less in the same role as men right out of the gate, when caregiving responsibilities haven’t even started.

An employee who is the victim of pay discrimination can suffer significant financial losses, making her less likely to be able to take care of herself and her family, as well as undermining her retirement security. The Women’s Fund of Rhode Island highlights the local wage gap in our 2017 Status of Working Women in RI and . We found that white women in RI make .86 to a male’s $1; African American women make only .71 to a white woman’s $1 and our Latina sisters make even less. Over the course of a 40 year work span, women of color lose up to $1.2M in wages alone. This wage gap also leads to a wealth gap for women, who live longer but have less to save for retirement.

On March 27, the U.S. House of Representatives voted to pass the Paycheck Fairness Act with bipartisan support. Locally, we are working to pass a similar Fair Pay Act (H-5659/S-509), which Speaker Mattiello has wrongly implied is the result of national groups descending on the Ocean State to push bad ideas. Rest assured, a coalition of 17 local organizations, including unions, faith based organizations and those fighting for economic justice are working together with Representative Susan Donovan and Senator Gayle Goldin to pass this important bill.

While the Equal Pay Act of 1963 made it a federal requirement to provide equal pay for equal work, the courts have narrowly interpreted this to mean everything must be identical in order to claim pay discrimination. The Fair Pay Act calls on employers to provide equal pay for “comparable” or substantially similar work, a standard used by many other states, including Massachusetts. This standard recognizes the reality of the modern workforce where so few of us have identical jobs. Comparable work is viewed as a composite of skill, effort and responsibility, performed under similar working conditions. Employers will still be able to pay different amounts based on seniority, experience, shift and travel differentials and performance.

What else will this bill do? Similar to the national Paycheck Fairness Act, this bill will put gender discrimination sanctions on equal footing with other forms of wage discrimination by allowing women and other protected classes to sue for compensatory and punitive damages. It also prevents employers from basing new salaries on an applicant’s historical salary data and provides salary range transparency.

In the end, fair pay will result in a better business climate. Employers will have quality, happy employees less likely to “turn over” for better paying jobs. The economy will prosper because there will be more disposable income to share. And our community will be stronger because women will be better able to take care of their families. The Women’s Fund of Rhode Island encourages those who support the idea of fair pay to reach out to their legislators to bring this issue to the floor for a vote.

Written by Kelly Nevins, Executive Director of the Women’s Fund of Rhode Island, whose mission is to invest in women and girls through research, advocacy, grant making and strategic partnerships designed to advance gender equity through systemic change.