Women Should Not Be the Presidents Political Pawns

Women Should Not Be the Presidents Political Pawns 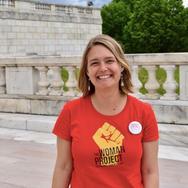 I will be honest. I pondered whether I would watch the “State of the Union”. I knew I would cringe at the hateful rhetoric about immigrant communities and roll my eyes at claims that the current administration’s policies are making our country great in spite of the fact that they have pushed policies to deny health coverage for reproductive health care, roll back protections for transgender people, and block the availability of federal funds for family planning providers. But feeling the need to be engaged in the policy process that impacts our daily lives, I turned on the television and readied myself.

I was heartened when the camera panned across a sea of women from Congress and their guests in white in honor of the suffragette movement as I made it through bluster about border security. I found myself baffled by this president making a strong statement in support of paid leave and felt a moment of hope that an issue so close to the needs of women and families would be mentioned, but the fact that he then pivoted to attacking the healthcare that many women need to manage their health and plan their families was a thud back into a reality where the leader of our country makes fun of women’s appearance and talks about grabbing women without their consent.

Let’s be clear. This president does not care about women. He spoke of having more women in the workforce while he has actively pushed for policies to allow a woman’s boss to take away her access to contraception. He clapped at the women in white and talked about unity and then spewed hateful rhetoric about abortion in order to appease his base and breed even more conflict.

This is nothing new. In the past he has said publicly that women should be punished for having an abortion. What makes it particularly troubling, however, is that he did not just push his personal beliefs on the backs of women, he lied.

The president spoke of needing to push legislation to prevent women from seeking abortion right up until birth. This is a claim that is being thrown around after the passage of a bill in New York that ensured that if a woman needs to terminate a pregnancy to save her life or protect her health that she could get access to care. Trump talked about a culture of life, but apparently the care that may be needed to save a woman’s life is not part of his commitment.

Opponents – people who to be real do not want anyone to have any access to abortion – are pushing truly absurd claims about the New York law saying that it would permit a woman to seek an abortion at any stage in pregnancy for any reason. This is simply not true and they know it.

We have heard similar misinformation here in Rhode Island about the Reproductive Health Care Act (H5127), but the fact is that this bill simply codifies the protections of the Roe v. Wade decision into Rhode Island statute and removes laws on the books that are unconstitutional and unenforceable. In other words, nothing will change except that the protections we have under Roe v. Wade will now be provided and protected under state law.

The RHCA allows a pregnant person the right to a safe, legal abortion up to fetal viability. The definition of fetal viability in the RHCA is identical to current federal law established through Roe. After viability, access to services would be limited to cases where a woman’s life or health was at risk. Later abortion care is only provided in cases where the life of the pregnant person is in jeopardy. This is the law as it stands today and the RHCA does not change that.

I am troubled by the fact that in the midst of the debates about different bills and the deceitful claims made by the president, it has become all about politics. For me and for the majority of Rhode Islanders who support the Reproductive Health Care Act, this is not about politics: it's about our health and our ability to control our own futures.

Instead of listening to politicians pushing their myopic agendas or people making salacious claims who would take away all access to safe abortion care, let’s listen to the women of our state who have made it clear that we do not want to wait around for the Supreme Court to take our rights away. We want lawmakers to take action this year to pass the sensible, well-crafted policy they have before them. The time is now to pass the Reproductive Health Care Act and put our health and rights before political game playing.

Jordan Hevenor is the co-director of The Womxn Project, a grassroots, statewide organization that uses art, education and advocacy to build a stronger movement for reproductive health, rights and justice in Rhode Island.